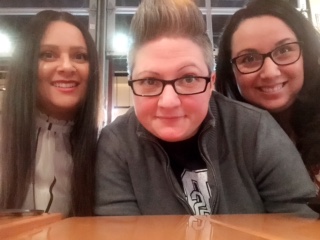 I met up with my family on a rare and gloomy Arizona Sunday afternoon to celebrate my brother’s birthday at a local restaurant. I was greeted by lots of smiling familiar faces that seemed to add color to my dreary Sunday. There was a seat saved for me somewhere in the middle of a very long table of about 25 guests. I took my seat after greeting my nieces and nephews and I visited with my brother and his girlfriend. We chatted about the usual things like my view on the local real estate market, our new favorite Netflix shows and what kind of adventures we each on the horizon.

I moved myself down to the end of the table so that I could visit with my youngest sister and her new wife Jenn.  Jenn and I talked about hiking Hunter Trail near Picacho, Arizona. I’ve heard the trail can be moderately difficult but it didn’t stop Jenn and I from making plans to conquer it. We spoke of writing, dealing with anxiety and making plans for the future. Then there came point when Jenn said something like “you have no idea how much you inspire me”. I was flattered as I’ve never really thought of myself as an inspiration to anyone much less Jenn.

It got me thinking about how proud I was of both of my sister and Jenn. It’s been a couple of years since my sister came out and told the family that she was gay. I remember immediately responding to her with that it didn’t matter to me because I loved her no matter what. As the days went by I found myself analyzing and wondering how my sister could be gay. I’ve never viewed being gay as any sort of issue before. Some by best friends in high school were gay and I loved them. Being gay was never an issue with me and prior to this, being gay was like someone having short hair, it didn’t matter to me. When it came to my sister though I was a in denial that she was gay.

My support and love for her never wavered but it caused a lot of confusion for me as I tried to make sense of it all. I knew she had a girlfriend named Jenn that I heard was awesome but it took a little while before she was actually introduced to us to her and for me to realize that it was true. Jenn was awesome and it came naturally for her. From the very moment I met her, I liked her and all of my concerns didn’t matter.

Looking back at my reaction to my sister coming out I realized that my denial was due to me wanting to protect her. I selfishly wanted her to not be gay and to conform to what society deemed as normal. I didn’t want to see her being discriminated against for who she chose to love. This past weekend at the restaurant with my family I came realize that my little sister didn’t need me to protect her because she was already strong and incredibly brave. Coming out is one of the bravest things a person can do and she did it.

Love is LOVE and when you find it you must do whatever you can to not let it go no matter what the path ahead might look like.