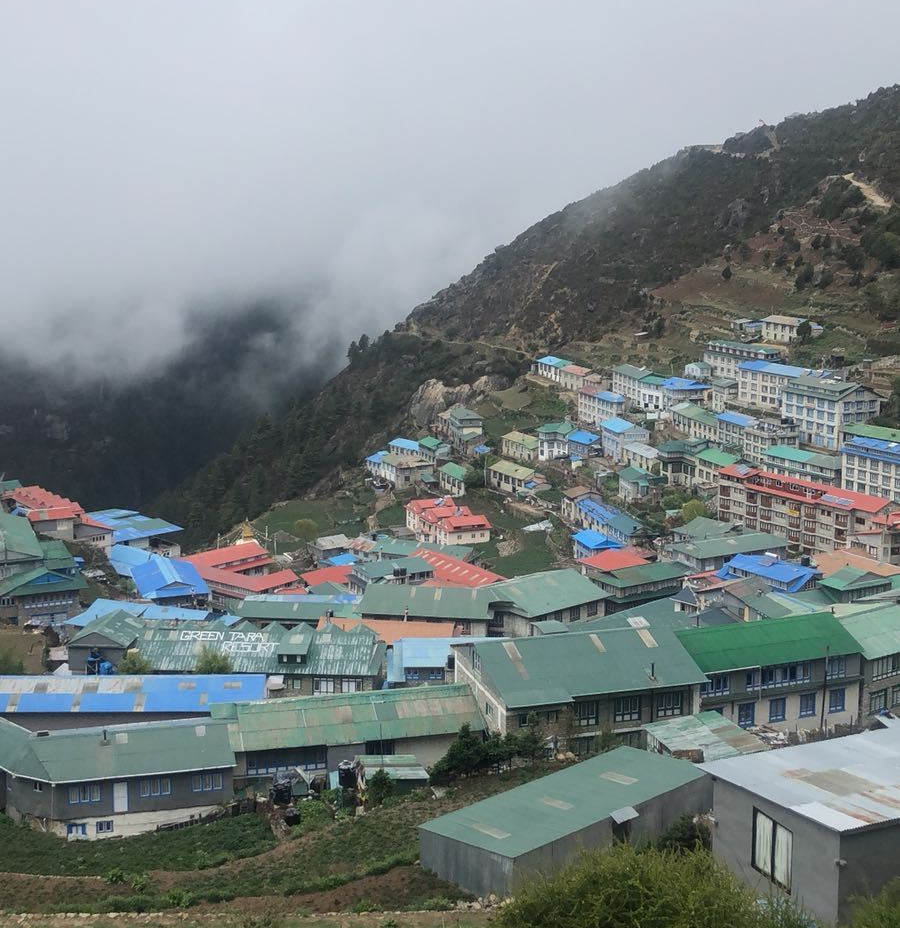 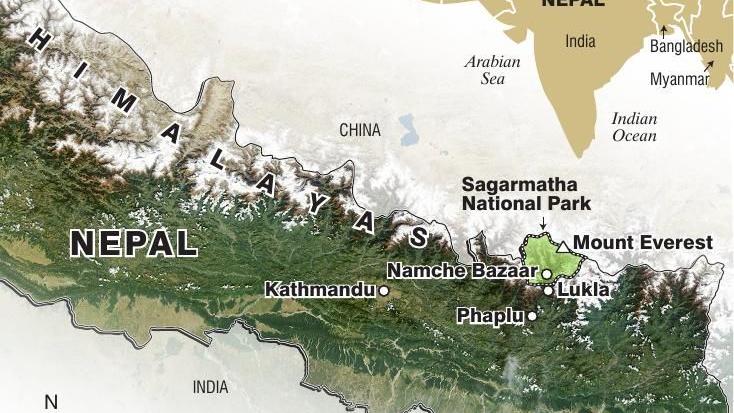 Correspondence from Curt and Zoe was silent for the most part of the day. I assumed that the cell coverage was probably to blame but the reason actually turned out to be that the hike on this day was pretty difficult therefore the focus was on putting one foot in front of the other and pushing through to the next stopping point. Noah and MeiLi were consistently on the minds of both Curt and Zoe and that helped get them through it all.

After reading the update sent over by Curt and Zoe it finally set in with me that this trek is not easy. It struck a particular chord with me because whenever I’ve talked to people about their upcoming adventure I always made sure that I was clear they were “trekking to base camp NOT the summit” to which many would reply with “It’s not JUST base camp it’s MOUNT EVEREST”. They were right.

The night before they were to set out and tackle DAY 2, Curt lay awake for most of the night out of fear of the difficult day ahead. For all the years I’ve known him not once have I ever heard him say that he was scared of anything. 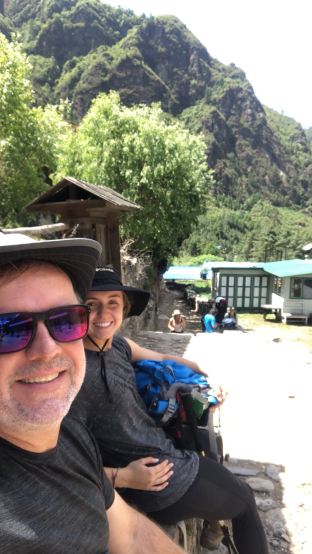 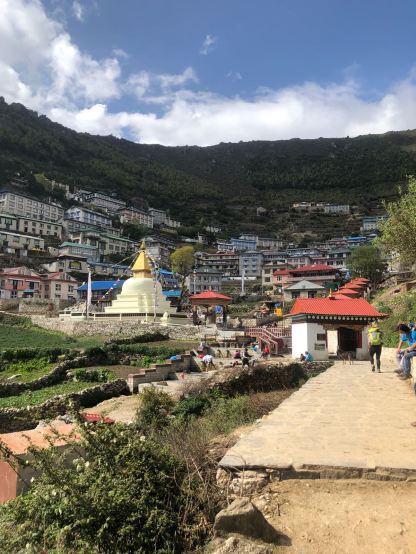 The morning of day 2 of their journey had arrived. A 7 hour hike was ahead of them and was said to be one of the most difficult days they would experience on their trip. Despite the degree of difficulty there were also plenty of exciting things to look forward to. They would get to cross 6 suspension bridges that would offer amazing views of the surrounding peaks and towards the end of their day, if the weather was clear, they would get their first glimpse of Mount Everest in all her glory.

Before going to sleep the night before day 2, Curt read the story of Noah and MeiLi to the group which consisted of Zoe, tour guide Prakash, their porters Poukast and Sagar and 2 Australian hikers named Angie and Malwina. As he read the story he could see emotions in each of their faces then messaged to tell Noah and MeiLi that they “were touching people’s lives all over the world”. 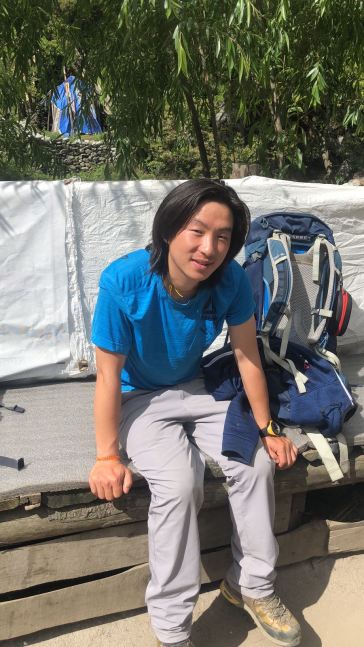 This is our main guide! Prakash 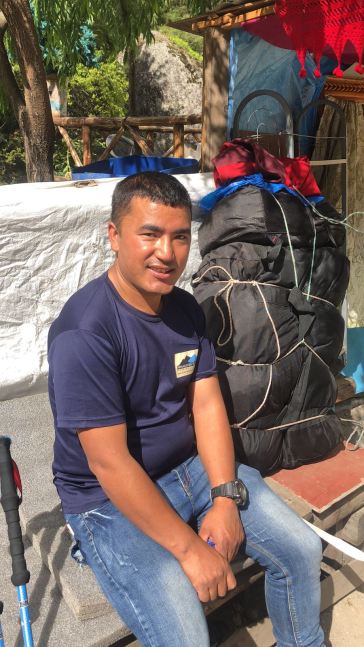 Our main porter Sagar. He probably carries 100 pounds in gear.

Curt “didn’t sleep very well at all the night before “because of the fear of the hard day to come”. The day started off good and then got to be more challenging as it progressed. The group was now starting to feel the effects of the altitude although it wasn’t horrible. Zoe was on a mission as Curt trailed behind her feeling like an anchor to her.

They opted to skip the tea break and just motor up to the next stop for lunch. At lunch they each had 2 gel packets for energy. Later on they would have a Thailand-Red Bull “different from ours and better”. Fear started to creep in again at lunch because the second half was said to be hard and IT WAS! 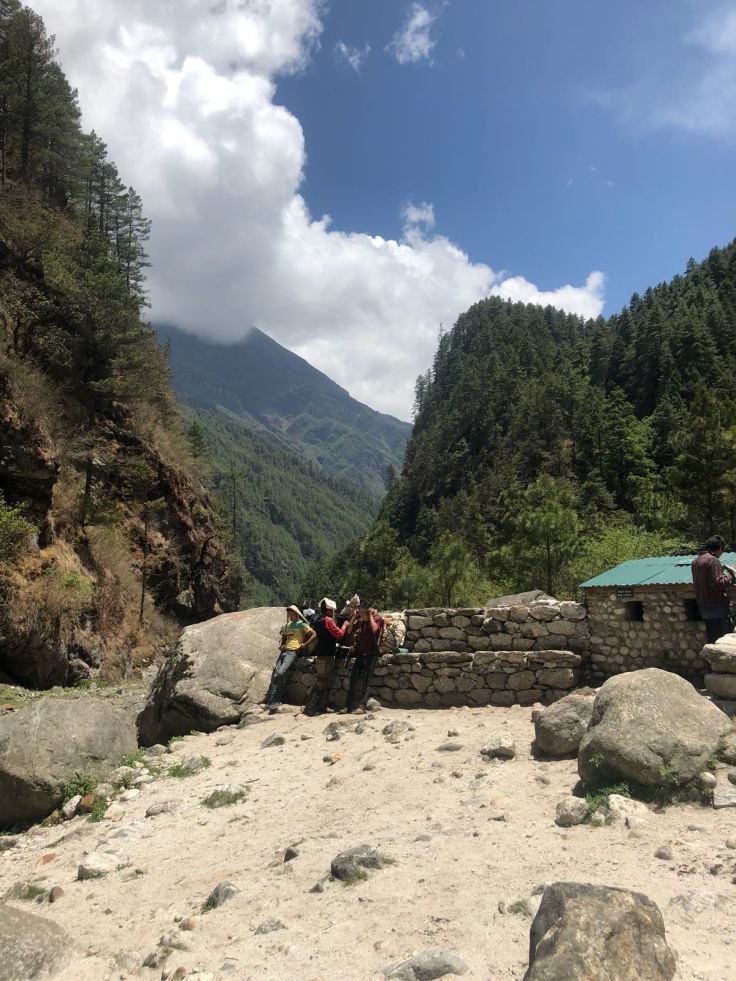 Curt continued to be Zoe’s anchor as they climbed and climbed. Three dogs happened to join the group along the way. One dog in particular especially loved Zoe! Upon entering the town of Namche the dogs spotted a cat causing them to abandon the group as they set off to chase it. 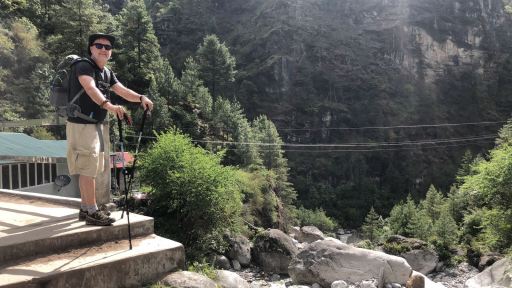 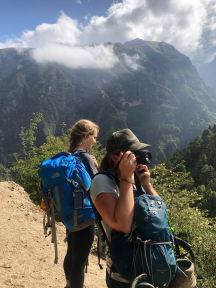 One of the highlights of the day was crossing the highest bridge over 150 m high. The weather was very warm. Curt hiked in shorts and a tee-shirt. The rivers were full of water that carried with it the melting snow from the Himalayas. Zoe, Angie and Malwina “kicked ass” on the last part of the steep climb. Curt just put one foot in front of the other and motored himself up too. The views got better and better the higher they got until finally they had made it! They hiked up to an altitude over 11,200 feet and they could feel the difference in elevation. Because it was cloudy Everest could not be seen but knowing it’s there and will be in view very soon has given Curt and Zoe a huge dose of excitement! 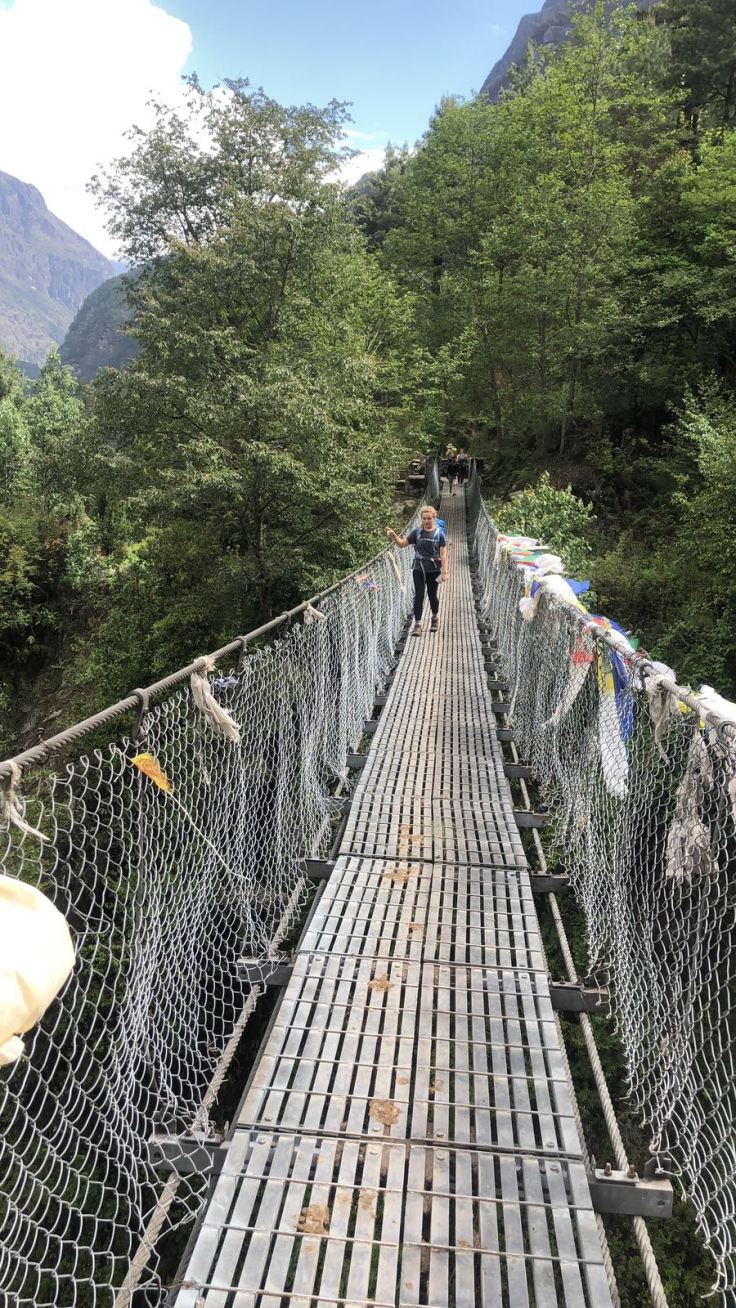 The next couple of days will be spent in Namche doing hikes nearby in order to acclimate to the higher elevation.

Noah and MeiLi you are always on Curt and Zoe’s minds. You both are motivation for them to keep going until they reach Mount Everest Base Camp.

Thank you very much to everyone that has contributed. We’ve still got a ways to go so if you are able to donate then we kindly request a donation. Just as important please share the campaign on your social media sites.  You may copy and paste the link below.